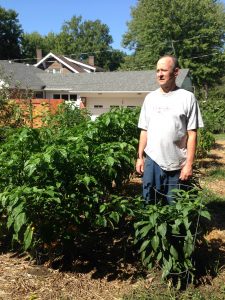 My darling husband is a hot pepper freak. A few years back, he began growing a few odd specialty peppers. This has now become an obsession.  I’ll have to see if I can get a few more photos of how big these plants are now, but basically we have an abundance of peppers and tomatoes, which is good because we love Mexican food. But some of these peppers are so hot, I can’t eat them. How are you supposed to eat a pepper named “Trinidad Scorpion”? Yeah, it tastes just like it sounds. In fact, that pepper has NO taste, it is all heat. And even HE wouldn’t recommend them. They can seriously put you in a world of hurt. 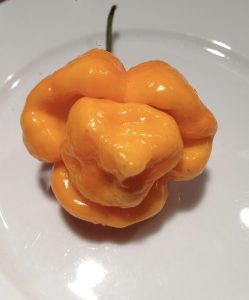 His favorite pepper by far is called Yellow Brain. It is a super hot pepper that looks similar to the Ghost Pepper, but has a much better flavor. It’ll still set your ass on fire if you eat too much of it.

Personally, I love the milder peppers and the standard ones, like the Jalapeno. I guess I’m just used to them, but regular Jalapeno peppers are the best all around for my chili and putting in my hash browns. I deseed them and take out the rind so I can actually eat them. 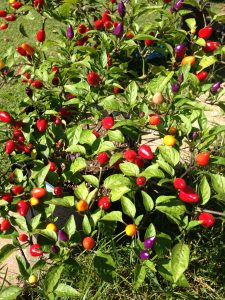 One of the plus sides to growing these types of peppers is that they are very tolerant of all kinds of weather. They need full sun, but most of these are pretty drought tolerant. And some of them are really beautiful, like the Chinese Five. It’s an ornamental pepper that changes colors. So during the summer, you’ll see it start at green, then go to yellow, red, purple and every color in between.

One of the newest peppers we’ve tried is call the Starfish. It is so sweet, that you can eat it right off the vine and it is the first pepper I’ve ever eaten that way. The only downside is they are so small! But I love them and they are healthy. 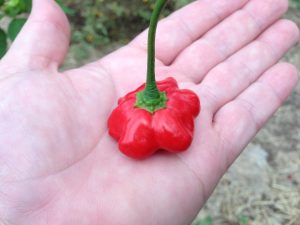